Mala are mainly used and worn by Hindus for meditation and religious practices. It helps unify their mind, body, and soul, but it should be natural and of good quality to get the desired outcomes. Rudraksha, sphatik, moonga, and other materials can be used to make these malas. These help bring positivity to the wearer and harmonise the aura around us. 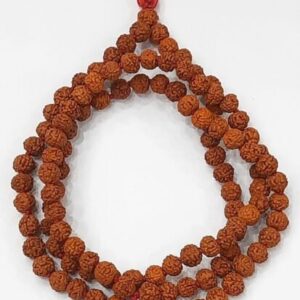 Rudraksha Mala is a very common component of the Hindu faith and is used while offering prayers to God or during mantra chanting. It is generally seen in the hands and around the necks of sages. The natural mala is made from the seeds of a tree called Elaeocarpus ganitrus.The word Rudraksha is made up of two words: Rudra (which means Shiva) and Aksha (which means eyes). It is associated with Lord Shiva. These were used for numerous purposes, like therapy, astrology, and spirituality. It is believed that Lord Shiva himself wears Rudraksha.

Rudraksha mala comes in a number of shapes, sizes, weights, and mukhs. The mukha is the main factor that determines the value and significance of beads. It comes in a range of 1 to 21. All different Mukhi Rudrakshas are used for different benefits.

Different mukhi rudrakshas reflect different energies and help balance chakras. For instance, a 13 Mukhi is known to activate the decision-making chakra and bring clarity to the wearer. Similarly, a 7 Mukhi is worn by people to obtain the blessings of Mahalakshmi, the goddess of wealth. A Panchmukhi (5 mukhi) is famous for bringing calmness and peace to the wearer.

Sphatik mala is also one of the most common in Hinduism. It is popularly known for its auspiciousness. Sphatik is also used by Muslims and Christians for religious purposes. It is very essential element in mantra chanting, pooja, meditation, and other spiritual activities. It is made up of rhinestones (quartz and sphatik stone).

It’s a combination of silicon and oxygen. Quartz stones, commonly known as sphatik crystals, are normally clear.For best performance, your mala must be natural and should include one hundred and eight beads of identical size and shape. You will not receive any benefits from broken beads. Remove any damaged beads from your mala as soon as possible.

Sphatik Mala has a powerful shield of light and power around her that protects the wearer from harmful vibrations. Sphatik makes them more loving and allows him to appreciate life more fully. Sphatik is known to help people achieve their goals in life. Wearing a Sphatik or quartz crystal mala increases one’s sense of purpose in life, reduces stress, boosts healing skills, and aids in balancing one’s life.

The sphatik is claimed to have spiritual properties since it relaxes the mind. Individuals wear it around their necks to keep their body temperature down and their brains cool. 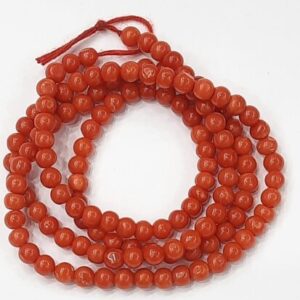 This mala is made up of red coral and is used to worship the goddess Lakshmi and Lord Ganesh. Astrologers advise wearing the moonga mala as a band on your hand (fingertips) to get the most out of it. This can be worn as a mala, necklace, or band.

According to Indian astrology, it is associated with the planet Mars. Wearing this shields you from the negative effects of Mars or Mangal. Mars symbolises the blood, energy, and vitality of human life. People usually call Mars the god of courage.